I’m not really a gadget geek.  Really, I like to keep things simple.  I like the simplicity of picking up a book and leafing through its pages.  Still, several years ago, I became smitten by e-book readers.

I don’t remember how the love affair began.  It was the early 2000s and discussions about ebooks and ebook readers were slowly making their way into the mainstream.  Somewhere, somehow I got wind of a Gemstar eBook reader that I could purchase online for roughly $99 (or $149 for a color version).  I opted for the black and white version, wanting to keep things simple.  And thus the affair began. 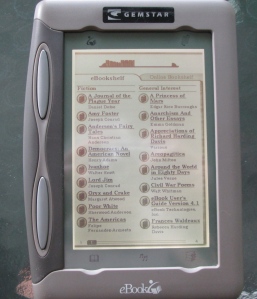 My Gemstar is a solid 22 ounces, about the size of a paperback, with a grip on the left side that makes it easy to hold with one hand.  It has a touch screen, a stylus specifically for navigating the “Bookshelf” and two buttons on the left side for paging through books.  It has about 8 MB of memory and I also use a smart media disk of 128 MB.  On my Gemstar, I have contemporary books such as Newjack by Ted Conover, classics such as Les Miserables by Hugo, and lesser-known works such as The Amateur by Richard Harding Davis.  I must have purchased the Gemstar around 2003 because I also have a few articles from the New York Review of Books saved there from that year.

Alas, within a few short years, support for the Gemstar evaporated entirely:  no technical support, no online bookstores dedicated to the Gemstar.  The flame had gone out of the affair.

And, yet there was still a spark.  A few years later, on a camping trip, my husband and I huddled together in our small tent, on a dark windy night.  I pulled out my Gemstar and read parts of Newjack to him until he was ready for sleep.  I often said then and I’ll say it again now that the portability of an ebook reader is its greatest advantage.  I had a long list of books for my husband to choose from that night, and I could not have backpacked all those books into camp.  While the Gemstar was my first love, it may also be my last.  I have since bought a 3rd-Gen Kindle (right before Amazon came out with the Fire and substantially dropped the price … damn you, Amazon!)  But I missed the expanded memory that I had with my Gemstar, the touch screen, the ability to add books and articles of various formats.  I liked the Kindle at first but now it’s primarily an overpriced word game player.

Then I got an iPad 2 which I bought with some hard-earned second job money and found (oh, crap!) that I could have just put the Kindle app on my iPad and been done with it.  I love the touch screen and would read books or catch up with news on the iPad during my lunch hour.  But still, I wasn’t satisfied.  I was itching for something simpler, something more ebook dedicated, something I could read in bed without the lights on, without an LCD burning my eyes out.  I have read review after review after review comparing the Kindle with the Nook with the Kobo with the iPad.  Although we have a Barnes & Noble in town, I was hesitate to buy a Nook.  B&N may not be as big as Amazon, but, bleeding heart liberal that I am, I wanted something more “indie.”

In April I purchased a Kobo Glo.  I had found good reviews of the device, it’s capacity for storage, various ebook formats, and its “night light.”  Unfortunately I had to buy it online since the one independent bookstore in my town didn’t carry it.  Here’s where the blues comes in:  I can’t get the wireless to work, no matter what we do (reset, factory reset, unsecure our network, secure our network).  The device doesn’t always recognize the memory card, and the touch screen can be a little quirky.  I’m using Calibre to download and add books outside the Kobo BookStore, but that can be a little squirrelly too.  And even though I thought I had thoroughly vetted the Kobo, I’ve since learned from Calibre that “The Kobo has very buggy firmware” (from their manual).

Sigh.  When my Kobo works, it’s wonderful, and I have enjoyed using it to read at night.  Nobody is disturbed by the gentle light around the edges of the screen, and my eyes don’t get fried.  Yet, today it took several attempts to transfer a bundle of new books from Calibre to my Kobo.  Admittedly, I may have not been syncing correctly.  All these gadgets seem so sensitive to how they are handled.  Even some of the apps on my iPad are having hiccups following the latest system update.