I am very happy to announce that I met my 50,000 word goal in Camp NaNoWriMo!  And how did I meet such a lofty goal, you ask.  Why, by frequently combining blog posts with my novel writing, such as I did here and here.

And here I go again!  This post is rather long, but if you’ve read my and John Howell’s latest Top Ten List on losing weight, then you should be able to breeze through it.

I have to admit that editing this third book in my series will be very interesting since it contains a book review, a guest blog, a revised fairy tale, and now this riff on our Ten Top List.  Hope you enjoy 😉 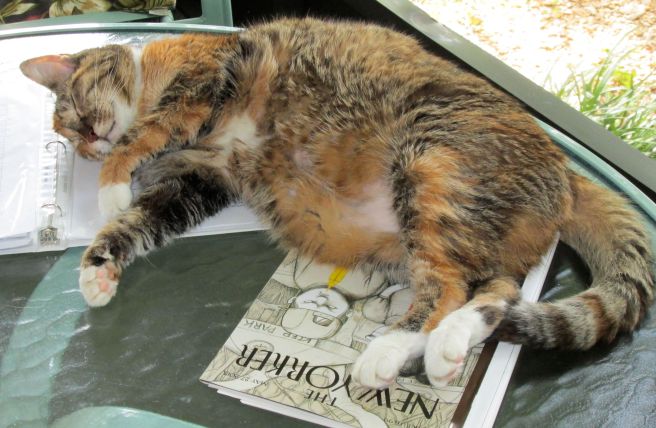 An excerpt from The Widow’s Club:  Guilty Until Proven Innocent

Maggie took a sip of her hot chocolate and turned on her laptop.  She wasted no time in heading to her favorite blog, Fiction Favorites by John Howell.  She loved his blog and now his Monday morning post of “top ten things not to do” list.  It was a collaboration with some other blogger, but she hadn’t bothered to visit the other blog.  She was plenty satisfied with Fiction Favorites.

She needed a laugh, she needed some distraction from Mary’s anxiety, Melissa’s disappearance, and Randy’s unknown whereabouts.  Their lives were becoming more like a poorly written soap opera.  She clicked her way to Fiction Favorites and almost shot hot chocolate through her nose when she saw the title:  “Top Ten List of Things Not to do When Trying to Lose Weight.”  Maggie had been fighting with her weight all her life.  She had never been obese, just overweight enough to be self-conscious about her figure, particularly the waxing and waning of her waistline.  This should be good, she thought, as she hunched over the laptop.

She read the first item in the list:  “When trying to lose weight, do not go on a 24-hour fast and then a Chinese buffet binge just because fasting is the new “in” diet.  The rapid transition from empty stomach to a stomach brimming with hot and sour soup, General Tso’s Chicken, spring rolls, crab rangoon, snow peas in garlic sauce, fried rice, and chocolate pudding can be explosive.”  She stifled a giggle.  She had actually done that once, and only once.  She had been so starving when she got to the Chinese buffet that she filled up her plate at least four times.  Nothing “explosive” happened, but she did wind up feeling like a beached whale all that night. Her husband Bobby had teased her about it for days afterward.

The next item was: “When trying to lose weight, do not mistake the South Beach diet for endless daiquiris and tapas at Miami’s South Beach.  You’ll never get into that sleek little bathing suit if you do.”  She smiled and glanced over at Mary, who was sitting on the couch and fiddling with her cell phone.  Mary had been to South Beach with Christopher a long time ago.  She wanted to ask her what tapas were, but Mary looked too distracted.  Probably just a typo, Maggie thought.

She read on:  “When trying to lose weight, do not sign up for your very first triathlon if your only familiarity with exercise is being able to juggle multiple remotes for your TV, DVD player and sound system.  You want to lose weight, not your life, which you will likely forfeit in the first five minutes of the competition.”  She snorted, but this time without getting hot chocolate up her nose.  She used to tease Bobby about his dexterity in juggling all their various remotes.  He could have turned it into an Olympic sport.

“When trying to lose weight, by all means, purchase a scale for weighing your food so you can be sure of the size of your portions.  Just don’t bring it with you to restaurants and weigh the food served to you.  At best, your friends will find the activity of watching you trying to weigh a dollop of mashed potatoes rather boring.  At worst, your food will be in an unappetizing state after the weighing.”  Maggie cocked her head while she read this item.  Who would bring a food scale to a restaurant?  Who would even think of it?  Maggie guessed that this list, or at least this item, was written by the other blogger, someone with a rather tenuous grasp on humor.

She sat up straight and her face flushed when she read the next item on the list:  “When trying to lose weight, do not buy spandex for casual wear EVER!  No explanation is necessary.”  Oh, really, she thought.  No spandex ever?  Why, she was wearing spandex at that very moment and it was very comfortable and not unattractive.  Of course, they were leggings, black leggings, and she had a long black rayon skirt over them, so …. She moved on down the list.

“When trying to lose weight, do not try to curb your appetite with bottomless cups of coffee, bottles of diet pills, or any other substance.  These have less to do with suppressing appetite and much more to do with making you so hyper that you never sleep, which, ironically, gives you more hours in which to eat.”  Well, Maggie thought, this is more true than funny.  She had tried diet pills herself when she was in high school.  Talk about being hyper.  She couldn’t stop talking.  She would talk right over Mary until Mary finally lost her temper and yelled at her to “Shut the fuck up!”  And they were in church at the time.  During Mass for a friend’s wedding.

Maggie sunk down in her chair and peered at Mary over the laptop.  Her cousin was gazing out the window, seemingly lost in thought.  Probably worrying about Melissa or Randy or both, she thought.  The memory of Mary’s outburst, in the church of all places, made Maggie feel reticent about sharing this list with her.  Any other time she would read Howell’s list out loud to her, or his haikus.  But this list was strangely unfunny.  The list was pushing all the wrong buttons.

Still, she continued to read:  “When trying to lose weight, do not take any diet pills that promise to block your absorption of fat (e.g., Alli).  Yes, they do work, but they work at all the wrong moments–in the middle of a business meeting, during a long commute, or while you’re sitting in the window seat of an airplane with Chris Christie next to you.”  She covered her mouth as she smiled at this item.  The image of being stuck on a plane between the window and Chris Christie was too much for her.  Never mind the idea that you have an urgent need to go to the bathroom.  She remembered Bobby once telling her about a meeting he was in at the bank, when one of the loan officers suddenly jumped up from her chair and ran out of the room.  They found out later that she had been taking Alli and made the mistake of eating potato chips with her lunch.  She barely got to the bathroom in time.  Ordinarily, he wouldn’t laugh at someone’s expense like that, but he said the look on her face was so funny, like someone had just poked her in the butt.

The memory of Bobby’s laughter made Maggie’s smile grow bigger, but her chin quivered as well.  They were both quiet types, introverts, but he had had a wonderful sense of humor.  His humor was much like John Howell’s and she thought that was probably why she liked his blog so much.

“When trying to lose weight, do not hire a trainer that looks like Arnold Schwarzenegger’s poor cousin and whose sales pitch is “I want to pump you up!”  What you might get “pumped up” with may not be legal.”  Oh, Bobby would love this one, she thought, as she bit her tongue to keep from laughing out loud.  Whoever wrote this item had to be thinking of those characters on Saturday Night Live.  She thought Dana Carvey was one of them.  Bobby had loved those characters.  John probably wrote this item.

Maggie scrolled further down the list.  Just two more.  She wrinkled her nose at the next one:  “When trying to lose weight, do not take up colon cleansing.  As with most of the items on this list, the result of too much of a good thing can result in frequent and expensive calls to your plumber.”  The other blogger must have written this list, she thought.  Really, John wouldn’t be so juvenile in his humor.  Of course, part of dieting does involve changes to one’s input and output, as Bobby had liked to describe those particular bodily functions.  But, really, she thought, the other blogger is just running out of ideas.

Finally, the last item.  She almost sighed with relief:  “Finally, when trying to lose weight, take a good long look in the mirror and ask yourself which is more important:  fitting into those skinny jeans you wore in high school or feeling strong, healthy, and happy, even if you are a little soft around the edges.”

Maggie sat back in her chair.  Well, she thought, that is kind of a nice way to end the list, given how difficult it is to lose weight.  And being healthy is more important.  But the last item was anti-climatic.  The whole list reminded Maggie of her own struggle to lose weight–just 10 or 15 pounds.  All the diets she tried.  All the times that Bobby would tell her not to fret about her weight so much.  He loved her curves.  He loved her.  But she did finally lose that 15 pounds plus another 10.  After Bobby’s death.  She had lost interest in eating then and for a long time, she only ate if food was put before her.  She’d gladly put all that weight back on if she could just have Bobby back.

Maggie closed the laptop and looked over at her cousin.  Mary returned her gaze and gave her a weak smile.  “It’s Monday,” Mary said.  “Any good lists on Fiction Favorites?  I could use a laugh right now.”