Top Ten Things Not To Do On Your First Anniversary

Here is the 52nd installment of Ten Top Lists of What Not to Do by Marie Ann Bailey of 1WriteWay at http://1writeway.com and John W. Howell of Fiction Favorites at http://johnwhowell.com. These lists are simu-published on our blogs each Monday. We hope you enjoy. 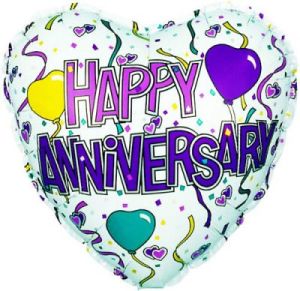 9.  If it is your first wedding anniversary, do not assume your spouse will want to celebrate the anniversary with all your family, friends, and the same people at your wedding.  If you do, at best your spouse will grudgingly put up with the crush and noise of partygoers.  At worst, your spouse will commit a disappearing act (sneaking out of the house to have that nice, quiet dinner your spouse really wanted), leaving you to be solo host, as well as clean-up crew after the party.

8.  If it is your first work anniversary, do not think you should necessarily expect some congratulations from your boss and coworkers.  At best, you will get some recognition for having stayed in the job for a year since no one else (including your boss) has, an insight which might cause you to start looking for another job.  At worst, you try to throw your own party during lunch time in the conference room which coincides with your boss’s own planned luncheon with the CEO, CFO, CIO, and COO, and you wind up playing caterer to them since you are now too embarrassed to admit the food was for your own party.

7.  If it is your first work anniversary, do not insist on going to the most expensive restaurant to celebrate with your boss and coworkers.  If you do, at best, no one will complain about the fact that all any of them (except your boss) can afford is the Caesar salad and a glass of ice water.  At worst, in honor of your anniversary, your boss will publicly suggest you pay the bill for the entire table since your anniversary grants you a 1.0% raise which, after taxes, translates to a 0.3% raise which after a year will cover the cost of the meal.

4.  If it is your first blogging anniversary, do not think no one will care if you ignore the event.  If you do, at best, your readers will likely be confused when you start writing posts beginning “When I began blogging over a year ago ….” since it’s fairly common to celebrate such an event and they won’t understand why you didn’t.  At worst, you’ll be out spotlighted into shame by your fellow bloggers who go ahead and post about their first-year anniversary while you sit and watch their readership grow as yours sinks.

3.  If it is your first blogging anniversary, do not think you can crowdsource your way to a fancy restaurant to celebrate.  If you do, at best, you’ll gain enough for a tip  and your readers will just shake their heads over your impudence and continue to read your blog any way.  At worst, a number of fellow bloggers will show up at the fancy restaurant expecting you to share your crowdsourced meal for one with all of them, forcing you to eventually crowdsource to get enough money to pay the bill so you don’t have to wash the restaurant’s dishes for the next month.

2.  If it is the first anniversary of your book, do not think it would be gauche to promote the hell out of it on your important day.  If you do, at best, an ardent fan will realize the date and promote your book for you, giving you an uptick in sales which you otherwise would not have had.  At worst, you miss your window of opportunity and your post-first anniversary sale bombs since no one understands what a year and a day anniversary is all about.

1.  If it is the first anniversary of your book, do not hesitate to promote the hell out of it on that important day.  If you do hesitate, at best, you’ll get a lukewarm response of increased sales from your lukewarm effort.  At worst, your promotion will be so tepid none of your readers will understand what you are promoting and miss the opportunity to purchase your book at less than the cost of a tall skinny Vanilla latte.

0. If it is the first anniversary … oh, wait, lists aren’t supposed to have 0s in them.  Well, this one does but not for a happy reason. On this first anniversary of our Top Ten Things Not To Do lists, I have published my last list with John.  I am stepping down as a collaborator on these lists and hope that many of you will now rush over to John’s blog (www.johnwhowell.com) and leave your comments about what not to do on one’s first anniversary of anything.

For personal reasons, I need to step down and step away from blogging, although not entirely; I just need to slow the pace of my postings, the weight of my own expectations.  John, as many of you know, is a wonderful writer, a good friend, and the best partner in blogging that I’ve ever had.  I love him dearly.  I will do all I can support whatever direction he chooses to go with this venture.  And for this reason I’ve disabled the comments on this post.  Any comments you want to make on the list, you make them over on John’s blog.  Any comments you want to make on my decision, save for later.  There will be a post later this week for that.  Until then, thank you for reading.  Thank you for your support.  And most of all, thank you for John.  I might never have met him if it hadn’t been for this wonderful world of blogging.