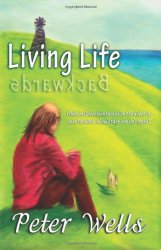 Randy shifted his weight in the uncomfortable straight-back wooden chair.  He was afraid to grasp the handle of the delicate teacup though he was thirsty for the hot tea.  Mary and her cousins were quiet, scrolling through their respective Kindles and Kobos for the book they were to discuss that night.  Randy didn’t know how he had been pressed into joining their book club.  The only reason could be that he had suggested the novel to Mary.  Living Life Backwards was an intriguing title he thought, and Peter Wells, the author, was a master of the short story, at least the ones he published through his blog, Counting Ducks.  That was another interesting title.  People usually count sheep.  Or the head of cattle.  But he had never known anyone to count ducks.

“I am done with intimacy.”  That was the first line of Living Life Backwards.  Randy had once been done with intimacy too.  A long time ago when he thought he had lost Mary forever to a man he didn’t believe was good enough for her.  Now she was his, and ever since she told him she loved him, he had wanted to know if he was just lucky or if this sort of thing happened to other people.

He looked up from his cooling cup of tea to see four sets of eyes fixed on him.  Lucy was sitting directly across from him, barely hiding a smirk.

“Do you want to start?  I mean, since you picked this month’s selection.”  Mary laid her hand on his wrist and Randy could see that she also was trying to not break out into a big smile, or even a laugh.

“Well, ah, sure, except I don’t really know what to say.  I mean, I enjoyed the novel.  Wells has a wonderful way with language ….”  He trailed off, wondering at his own language.  He wasn’t used to talking about books in a group.  Alone with Mary was one thing.  With a couple of other people another.  But with four women and just him?  God help him.

“I thought so, too.”  Maggie chimed in.  She often came to Randy’s rescue when he was at a loss for words.   “I loved how Wells explored each character, bringing out little details about them, things that don’t seem quite important at first.  But it all comes together at the end.”

“I’m not sure about the narrator, though.”  Without making eye contact with anyone, Melissa took away Randy’s teacup, poured the now tepid tea into a sturdy mug with a handle that Randy could easily grasp, and then slid it over to him.  Randy sat staring at the mug, perplexed but grateful.

“What do you mean?”  Lucy leaned forward.  “Misty was the one who bothered me the most.”

“Really?  Well … ” Melissa licked a crumb of shortbread from her fingers.  “Well, I think Bill, the narrator, is an unreliable narrator.  I don’t trust him.  I mean, the novel is written in the first person and the narration is almost conversational, like he’s sitting across from you, telling you a story.  I like the technique, but even though it’s first person, he’s also omniscient.  He tells you about conversations and events that he couldn’t have possibly witnessed himself.”

“That’s a good point.”  Maggie had picked up her knitting, and Randy could see that she was working at another pair of socks.  These were a simple dark brown, not the usual variegated colors that she used when knitting socks for her cousins.  He tried to temper his hope that perhaps these were for him.  “I didn’t really think about it at first.  I guess I was just wrapped up in the story.  He creates this almost idyllic life with these eccentric but likable characters.  It’s perfect except that it isn’t.  Bill and his wife are living a lie really, and then he’s in love or thinks he’s in love with his wife’s cousin.”  Maggie paused and for an uneasy second, the cousins looked at each other and then at Randy and then at their cups of tea.  “And he keeps alluding to something happening, even from the first paragraph, that I was just swept along.”

“Me too.”  Mary finally decided to join the discussion.  Randy started to relax.  With all of them talking, his silence wouldn’t be noticed.  At least not for awhile.  “At first, I just assumed that the narrator was told what happened, that perhaps part of the story was that he and Bernard had met, Bernard had told him everything.”

“But I think it was Bill’s own imagination.”  Melissa butt in.  Randy had rarely seen her this animated.  “I think he’s unreliable because his own imagination is so vivid, you give him a single thread and he’ll weave a whole cloth.  And yet I can’t be sure that things really happened the way he tells it.”

“He does make himself out to be Mr. Innocent.”  Lucy adjusted in her seat, trying to sit in a lotus position.  Randy wondered if she was as uncomfortable in her chair as  he was in his.  “I mean, he admits to not always being a nice person, having secrets and all of that, but I got the feeling that he has a bit of the sociopath in him.  Like, he’ll admit to some transgressions just so he can get away with another.”

“Interesting,” Mary sipped at her tea and then grimaced.  She reached for a cube of sugar and dropped it in.  “I was wondering … you know, how the narrator seemed to repeat himself?”

Randy shifted and the slight movement was enough to bring all eyes back to him.  “In my line of work, a person who repeats himself, keeps telling you the same over and over, is usually hiding something.  Or trying too hard to convince you of something.”

“Exactly.  Bill, the narrator, made me uneasy because of the repetition in his story, but I think that he was his technique.  At first you think, maybe the author, Mr. Wells, forgot that he had already explained Bill and his wife’s not-so-happy but convenient marriage.  But the more I read, the more I started to think that Bill was over-explaining himself on purpose.  To make himself seem like a victim of circumstance.”  Randy had heard a lot of stories, a lot of excuses from people who had broken the law during his years in the police department.  A fair number of those people could have passed for Bill.

“Okay, so we’re not sure if Bill is as innocent as he wants us to think.  Well, probably not innocent, but he does set the reader up to think that he tries, he really really tries to behave himself.”  Maggie dropped her knitting long enough to break off a piece of shortbread and dip it into her tea.

“Do you think Misty is innocent?  Or is she some kind of Lolita?”

The cousins seemed to freeze in mid-gesture as they pondered Lucy’s question.  The idea had crossed Randy’s mind too, but he wasn’t about to suggest that Misty, a woman much younger than Bill and presumably as pure as the driven snow, was in anyway responsible for how things turned out.  But some of her behavior, especially toward Bernard, seemed to counter her otherwise angelic demeanor.

Lucy unwrapped her legs with the agility that only a twenty-year-old would have.  She frowned.  She was about the age of Misty and Randy thought that perhaps she was disappointed in the character.

“Perhaps not a Lolita.  Perhaps her feelings were sincere.  But she definitely took everyone on a wild ride, including Bill.”  She smiled and sipped her tea.

“Well, what else?  What did you think of the ending?”  Mary started to collect the cups.  Randy held onto his mug.

“Interesting.”  He sat back and finished off his cold tea, his eyes on Mary as she carried the cups to the sink.  “It definitely leaves you wondering about Bill and the story he just told and what might happen next.  You’re not really sure what Bill is going to do.  Is the man even capable of staying with one woman?  Or will he get bored and want to move on?”

Mary looked back at Randy, and he could see that question in her eyes.  Will he get bored?  Will he eventually want to move on?  He stared back, holding her gaze long enough for her to blink and then blush as the thought came to her that she was one woman he would never be bored with.

“I like endings that aren’t neatly tied up, that leave you wondering a bit.  Not cliff-hangers.  But life isn’t just a collection of neat chapters.  There’s always something to make you wonder what will happen next.  So I liked the ending.  I liked the novel.”  Lucy stood up and used a napkin to sweep the shortbread crumbs off the table.

“I liked the novel. too,” muttered Maggie, engrossed in her knitting yet again.

“Well, did anyone not like it?”  Mary turned to face all of them.  No one answered and she allowed for a moment of silence before looking directly at Randy.  “Well done, Randy.”

Dear Reader, you can join the fun by getting your own copy of Living Life Backwards, available here at Amazon.com.  Please do drop by Mr. Wells’ blog at http://countingducks.wordpress.com/.  He writes wonderful short stories, often thoughtful, always entertaining.