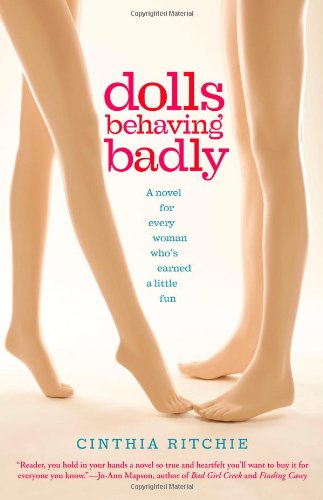 The sweet aroma of warm cinnamon coffee cake circled the kitchen, enveloping the cousins as they sat in their usual spots around the table.  Randy was pouring coffee into plain white stoneware mugs.  Mary had conceded to using the mugs instead of the usual delicate teacups she preferred.  Randy wasn’t clumsy by nature but he seemed to channel Elizabeth from the British sitcom Keeping Up Appearances whenever he handled fine bone china.

Mary was passing around slices of the coffee cake.  Maggie was knitting, and Melissa was leafing through the book they would discuss that morning.  She handed the paperback to Randy, and he grinned as he placed it beside his mug.

Randy had suggested Dolls Behaving Badly by Cinthia Ritchie.  He had come across the book while browsing in the local bookstore and thought of his mother as he read the blurb on the back cover.  She had been a single mother, waitressing and doing the odd babysitting and sewing jobs to get by.  He remembered her as being very talented with the needle, making almost all her own clothes so she could afford to buy Randy new clothes at the beginning of every school year.  Few people knew how hard Randy’s mom had worked to keep up the appearance of middle-class comfort.  The story of a single mom trying desperately to support herself and her 8-year-old son tugged at him.

“Good choice.”  Melissa patted the book.  “Ritchie creates an incredible but believable cast of eccentric characters.  It reminded me of that TV show we used to watch, “Northern Exposure.”  Here you have Carla Richards trying to eke out a living and support her kid in some backwater Alaskan community.  And yet it’s a tight-knit community.  Even her ex-husband seems to want to help.”

“I have to admit, though, when her sister just up and moves in with her and practically takes over Carla’s home, I kept wanting Carla to kick her out on her ass.”  Mary started to take a sip of her coffee when she felt all eyes on her.  Maggie had dropped her knitting and was staring at her.  Melissa had her head cocked to the side, peering at Mary through a fringe of black hair.  Randy, sitting directly across from her, had his eyebrows raised and she could read “what the fuck?” in his eyes.

She cleared her throat.  Her cousins, who had moved in with her rather unexpectedly when each of them had fallen on hard times, probably thought she was using Laurel as a way to express her resentment of them.  “Now, don’t read too much in that.  Think about it.  Laurel is so demanding and Carla just puts up with her.”

“Yes, but Carla needs Laurel too.  One of the things we learn about Carla is that she’s trying to straighten out her life.  She’s struggling, financially and emotionally.  She has a good relationship with her son’s father, but she’s still lonely.  Having her sister around fills some of that loneliness.”  Melissa pushed her hair behind her ear and looked levelly at Mary.

“Okay.”  Mary shifted in her seat.  Damn if there isn’t always some kind of tension between me and my cousins when we start talking about books.  And there sits Randy, enjoying every moment.  “I get that.  And perhaps one reason that Carla helps Laurel, or at least doesn’t throw her out, is in part because she’s trying to avoid developing a romantic relationship.”

Maggie nodded and resumed her knitting.  “That’s what I really liked about this story.  Carla is very independent.  She really wants to make it on her own, prove that she can support her son and straighten up her life.  You, the reader, wants that for her too.  Love complicates things.  The anthropologist that tries to hook up with her sounds almost too good to be true.”

“Until he starts giving her those rather odd gifts.”  Randy leaned back in his chair.  He liked the anthropologist a lot, admired the man’s confidence and persistence.  Randy had persisted with Mary until she finally admitted to being in love with him.  But his confidence was lacking.  He still feared that someone more interesting, like an anthropologist, might sweep her off her feet.  “Those gifts show that he’s rather eccentric himself, at least on the surface.  But really, he and Carla are kind of like kindred spirits, just Carla is too deep into her own problems to see it at first.”

“A lot happens in this novel.”  Melissa cut herself another slice of coffee cake.  “I love how Ritchie writes it in the form of a diary, in first-person, mixing in letters and recipes.  I think her technique gives the novel a special texture.  There’s a lot going on with the bill collectors and the credit counselor and her own efforts to be an artist and the anthropologist and Laurel and her friends’ problems and the babysitter and her ex-husband and the ghost of her Gramma—“

“You know, I am very tempted to try those recipes.  Gramma sounds like my kind of baker.”  Maggie grinned as she popped a piece of coffee cake into her mouth.

“And the way she brings in the ghosts, it seemed more natural than supernatural.”

“Do you believe in ghosts, Randy?”  Mary smiled at him and winked.

“I believe you can love someone and miss them so much after they are gone that your mind will conjure them up.  I know Carla really believes she sees and hears her, and that’s all that counts.    It’s a part of Carla’s self that she has to sort out.”  He winked back at Mary.  There were plenty of ghosts in her house, in the lives of the three cousins.

“So, how would we rate Dolls Behaving Badly?”  Melissa opened a small notebook where she had started keeping track of the books they had read and discussed.

“Five stars, hands down.”  Mary shook her head.  “Laurel annoyed the hell out of me, but I understand why Carla put up with her.”  She smiled at her cousins in turn.  “They’re blood, and they love each other.”

“All agree with five stars?”  Melissa smiled back at Mary and then turned toward Maggie and Randy.  The two nodded, and Melissa duly recorded the votes.

Randy picked up the paperback and squinted at the cover.  “But, man,” he said, “what she did to those dolls!”  He scratched his head in mock amazement as the cousins giggled in unison.  Before they had finished the novel, the cousins had scoured Mary’s attic in the hopes of finding their old Barbie dolls.  They all could use a little extra cash.

You, dear Reader, can also enjoy Dolls Behaving Badly.  I highly recommend the paperback version.  Just purchase a copy from any one of these vendors: