My husband recently bought a new tent. One that you can actually stand up in. One that unfolds like an umbrella, making assembly easy-peasy. If I were taller, I could probably put the tent up myself. 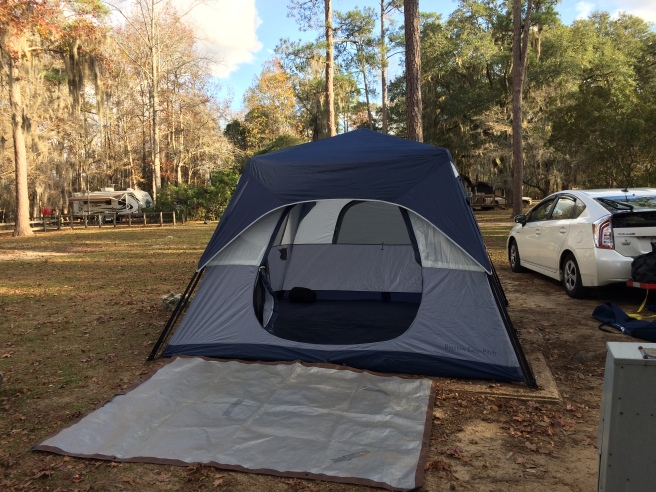 Our new tent (courtesy of LL Bean) with a tarp as a front porch.

To test out the tent, we spent a couple of nights at the campgrounds of Torreya State Park.  The park is only about an hour driving distance, yet after 26 1/2 years living here in north Florida, we’ve never camped here. We’ve hiked; the park has some fine hiking trails, although the bugs can be murderous during the (long) hot and humid summers. We elected to go during the Christmas holiday weekend with our fingers crossed that it would be safe to be outside.

View from the vista point a few yards from our tent.

We had beautiful weather, although we had hoped for cooler temperatures. It was high 70s, low 50s, which anywhere else would be perfect. In Florida, however, that can mean that armies of mosquitoes patrolling the skies, striking with and without warning, wreaking havoc and tears of frustration. Yet … aside from a few slow-moving, large mosquitoes that showed up at dusk and then promptly disappeared when night fell, we were practically mosquito-free. Will wonders never cease? 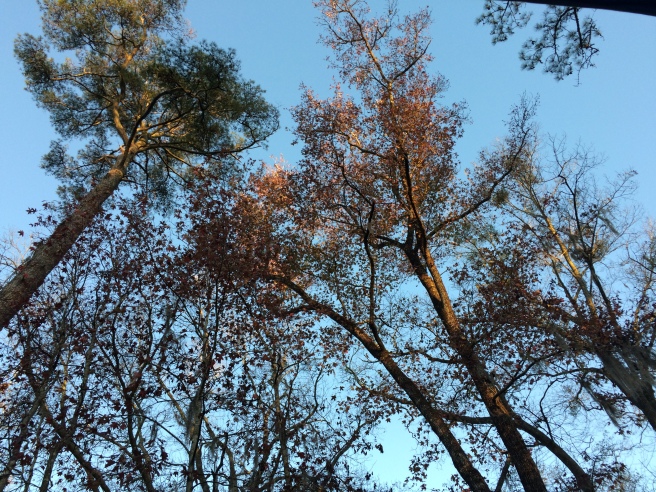 I like trees. Although they can make stargazing difficult, generally I like trees and there were some interesting specimens that I don’t see often in my own neighborhood, such as the American Beech. We have one that my husband planted in our yard a number of years ago; however, we’ll likely be dead before it reaches the height of the trees at Torreya.

We almost cut our camping in trip in half. Our first evening, neighbors at the nearest RV decided they wanted to listen to some (loud, obnoxious, contemporary) music while they cooked their dinner outdoors. It was the strangest mix of country and rap I’d ever heard and the music-lovers were roughly our age so … not only were we perplexed but we were also annoyed. We came to the campgrounds to enjoy the singing of birds and the sighing of the wind through the trees; apparently they didn’t and, while that is their choice, they were ruining the respite we had been looking forward to.

Fortunately, once their cooking was done and they were ensconced in their RV, the music was muffled and eventually all was quiet. We went to bed feeling hopeful. Although I woke often during the night, I experienced a state of near bliss finding myself in soft darkness, the starry sky visible from our open front flap, a light breeze lulling me back to sleep. At one point in the night, however, I was awakened by my husband shooing something away from our picnic table.

Forensic evidence of an intruder in the night.

We had left a bit of trash on the picnic table, enough to encourage a little thievery.  Fortunately, this critter took off as soon as my husband hissed at him, unlike the raccoons we used to encounter at Big Basin State Park in California, who would bring their entire families to our campground while we were cooking hot dogs, assuming an invitation to dine and ignoring our demonstrative entreaties to “go away.”

The night was so quiet and the next morning so peaceful, we decided not to leave. Instead, after a repast of mushroom and cheese omelettes and copious cups of coffee, a little knitting time for me and photo processing time for my husband, we went on a hike.

Interestingly, this is a simple pattern. Yet, I spent part of the weekend ripping out and then redoing rows because my counts were off. Sometimes simplicity is complicated.

We hiked the Weeping Ridge Trail which took us to a waterfall that had a mere trickle of water, but was still worth the visit. We detoured to a side trail which followed along floodplain forest and then back up to the road and eventually our campgrounds.

I hope you all have had a holiday season that brought you joy, peace and happiness.

Tagged as: American Beach camping how I spent my Christmas holiday weekend living in the moment the great outdoors Torreya State Park trees