Hello, everyone, I have a guest today: poet, family historian, and fellow cat lover, Luanne Castle. 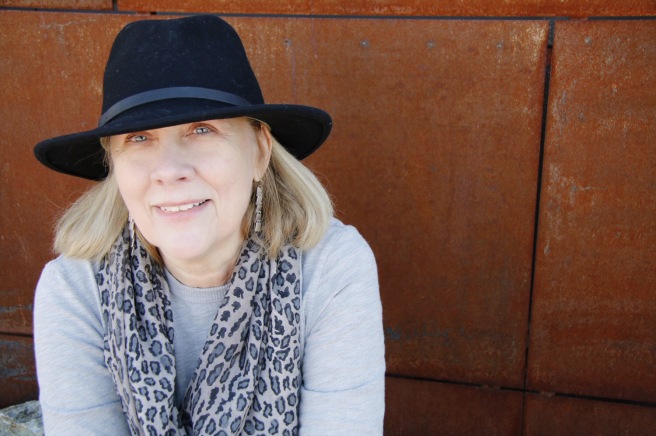 Many of you might already know Luanne from her blog, Writer Site, or her website, Luanne Castle, or perhaps you’ve already read her first book of poetry, Doll God, winner of the 2015 New Mexico-Arizona Book Award.

I’m excited to tell you that Luanne has a new chapbook coming out, this one with poetry AND prose AND women’s history.

Kin Types is available for pre-order from Finishing Line Press and you can read a wonderful review by Carla McGill here. Carla blogs at Writing Customs.

Luanne and I thought it would be fun to lob her a few questions about poetry writing, something I’m always fascinated by but wary of trying.

How did you decide to make Kin Types a collection of poetry and prose? Why not just poetry?

The mixed genre came about because a couple of paths I was on coincided.

My first book, Doll God, is a collection of lyric poems, the type of poetry I had been writing for years. Then you and I took that flash nonfiction course from Apiary Lit with Chelsea Biondolillo. I had signed up so I could try out a new genre. The experience took me to the border between nonfiction and poetry—and when I saw the border, I realized that it was a movable, even erasable border. We wrote prose poems and lyric essays. We experimented with embedding documents into our own writing. I felt so free to be able to move freely and spontaneously between two genres I love: poetry and nonfiction prose.

Since 2012 I’ve written the blog The Family Kalamazoo showcasing family stories, the results of genealogical research, and antique photographs from my family collection. Although I had worked on this research off and on since college, the blog gave me a connection to strangers who held information to what I was researching. And as I wrote up stories for blog posts about various ancestors, neighbors of my ancestors, and others, I loved making the connections between documents–such as census reports, death certificates, and newspaper articles—and the shaping of story.

After taking the Apiary course, the work I had been doing for The Family Kalamazoo began to inform my writing. I wrote poems, prose poems, and flash lyrical essays based on my research. The stories of these people—especially the women–who had been long dead began to come alive for me. They lived in my dreams and my waking thoughts; they informed my conversations and decisions.  When I began to compile the pieces into a chapbook, I couldn’t leave the lyric essays behind just because they weren’t technically considered poetry. To me the prose and the poetry were the same thing: imaginatively informed, lyrically described stories of real people who lived before us.

How do you write poetry? I took an online poetry class a few years ago and was fascinated by the different ways poets wrote. One poet described how she would start with one word and then build word associations until a poem emerged. Others were more interested in form, like how can to describe a sunset in a haiku.

I usually write a poem after I notice something beautiful or strange or an oddity I am curious about. This new image strikes against something I already know. Maybe I see a mother quail pushing a newly hatched chick out of the nest and wonder why. I might do a little research, and my mind starts receiving lots of images and it’s as if a match has been struck and the flame leaps from its tip. That’s the beginning of the poem. If I push it too soon, it doesn’t work, but when the time is ready I might add in another essential element. I might mix elements of a traditional fairy tale with scientific theories from astronomy or physics. It’s the juxtaposition, the balance, the fight between disparate parts that make some of the best poems.

I want to explain what I mean by my mind getting images from research. I don’t record dry facts very well. My brain converts information into images. In this way, science and nature are gifts to me because what scientists think of as facts, I process as sights, sounds, smells, touch, and taste. Poems crave images, not information or facts.

In many of the Kin Types poems, the juxtaposition or fight that produces poetry comes from the interrogation of supposedly factual historical documents with the nuances of complex emotions and hidden and unrecorded human dramas. In one poem I took an early death of a mother and studied what happened to her young son after he and his siblings were orphaned. I wrote the poem from her perspective as if she could see from beyond the grave what had happened to her children. Who could feel more about their paths in life than their mother? In Kin Types I converted fact into image to create what the reader feels from a poem.

Although I have worked with form as a writing constraint, that process is not how I usually come to a poem.  A writing constraint is always helpful. It can be arbitrary: write a poem in 10 lines of 10 syllables each and include the word orange. Or it can be specific: write a Shakespearean sonnet. But the point is that by hitting up against the boundaries of the constraint the poet doesn’t have the whole world from which to create a poem. It focuses and helps the poet shape the poem. Form is the typical way to create constraint. A sestina, a villanelle, a sonnet, these all are an aid. For me, however, I find that my best work doesn’t come from having to adhere to a certain form, but letting the poem find the form that is most suitable for it. So some poems want to be prose poems. Some want to be skinny and long free verse. But I could change my mind tomorrow and start to write in a particular form. The variety is astonishing, and I don’t want to settle into a familiar old groove.

How do you know when a poem is complete, finished, ready for prime time? Prose seems to be relatively easy to figure, especially, of course novels and short stories. Even flash fiction often has the expected beginning, middle, and end. But poetry is different. Or is it?

That’s the big question! It even warranted a poem written about it by Naomi Shihab Nye. It’s called “How Do I Know When a Poem Is Finished?”  In the most practical sense, as with any writing, only the editor has the final say on when a piece is finished. I’ve had poems and stories published with no changes made and others where an editor has several eager ideas—sometimes fabulous, sometimes mysterious. I’ve also published a piece with changes by an editor and then reprinted the same piece and the new editor has different ideas for changes. At least once, the advice was contradictory. Feeling a piece is finished is the same for me whether it’s a poem or prose. When I’ve let it gel for a couple of weeks, if not longer, and have revised as much as I feel I can, I either need a second opinion or I feel good about the piece. If I feel that I want to share it with readers and not an editor, it’s a go. But, still, occasionally I’ll read something I’ve published and want to reach into the letters on the page or screen and snatch some, re-arrange, or add a few.

Many thanks to Luanne for answering questions I’ve always wanted to ask a poet! I hope you, Dear Reader, have enjoyed this and are eager to pre-order your copy of Kin Types. If The Finishing Line doesn’t get enough pre-orders, then Kin Types won’t go to press so waste no time because the deadline is April 28, 2017.