Living in the Moment: Carhenge and Clouds #MondayBlogs #Carhenge #clouds

Originally we were going to go to Madras, Oregon, and because my husband would need to bring a lot of gear, we would have to drive. Ah, those were innocent days when we talked about driving all the way to Oregon, maybe staying at a B-and-B close by, taking time to visit friends in the state, maybe try to squeeze in a visit to the San Francisco Bay Area . . ..

Yeah, well, my husband and I always have big ideas when we don’t have to act on them.

About a year ago, my husband learned that the Astronomical League would hold its annual national convention in Casper, Wyoming, over a few days before the eclipse. Casper was in the path of totality. Why drive all the way to Madras when we could save time (and money) by going to Casper? This was probably one of the smartest decisions we (ever) made. My husband is a member of the Astronomical League and so he was able to obtain hotel accommodations at a discount. The main hotel was already booked solid, but we were able to get one of the last rooms in Evansville, just outside Casper.

I left my husband in charge of the remaining accommodations for our trip, along with the itinerary.

The first two days of driving were not much fun as it seemed to take forever to get out of the southeast. Two-lane interstates where semi-trucks played leapfrog with each other and automobile drivers with frayed nerves jockeyed to get around them. Our first stop was Olive Branch, Mississippi; the second was North Kansas City, Missouri. By the end of the second day, I was convinced that I was too old for this kind of traveling and that I would need a stockpile of anti-anxiety drugs if I was ever to do it again.

In an upside-down kind of good fortune, we woke to a thunderstorm on our third day. We still had to get through Kansas and a bit of Nebraska before we’d reach Wyoming. We watched the weather and studied our paper maps. In times like this, our map apps are essentially useless. We found a highway we could turn on to from the interstate. Highway 36 aka the Pony Express Highway. We would be driving right into the storm, but it was moving fast and with any luck, we wouldn’t be wet for long.

The good fortune was in us having a need to get off the interstate. Interstates are presumably designed for speed but often they are at best boring, at worst ugly as sin with miles of billboards blocking what little scenery there might be. And those are the well-maintained interstates.

By contrast highways have a slower speed limit and fewer amenities such as rest stops but you get to see the country, you drive through small towns that you wouldn’t otherwise know existed. In Kansas we saw rolling green hills, miles of cornfields, dairy farms, cows lazing in the grass: it looked just like north New York, where I spent my childhood. I had no idea that Kansas could be so lovely. And the sky . . . so much sky. The storm had left behind some amazing clouds in its wake. Another thing you can do on a highway that you can’t do on an interstate: pull over and take pictures. 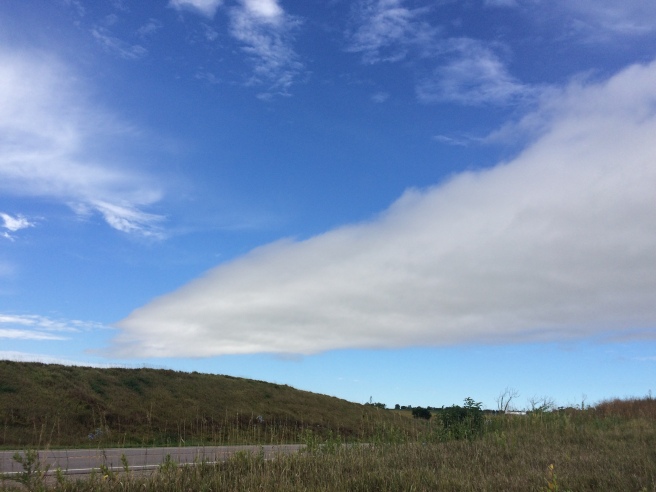 During our drive, my husband reminisced about other cross-country trips he had taken and how unnerving it could be to see the Earth’s curvature. So when I turned around, away from the roll cloud and saw another cloud just barely visible at the horizon, I got a little queasy.

Cloud BELOW the horizon

Another advantage of driving highways is you can have side-trip adventures. Carhenge just happened to be on our way.

Next stop North Platte, Nebraska and then on to Wyoming! And Happy Labor Day to all of you (including me) who are grateful to have the day off!

P.S. I’m back to writing an original once a week with occasional interludes. We’ll see how long this lasts.