Recently I was the lucky recipient of a free AUDIO version of Fatal Rounds, Carrie Rubin’s latest novel. Y’all know how much I enjoy audiobooks. Although I disdain multitasking, audiobooks are what get me through hours of housecleaning, walking, and knitting. So when I learned there was a raffle for a free audiobook, I got as many raffles as I could. And, yay, I won! 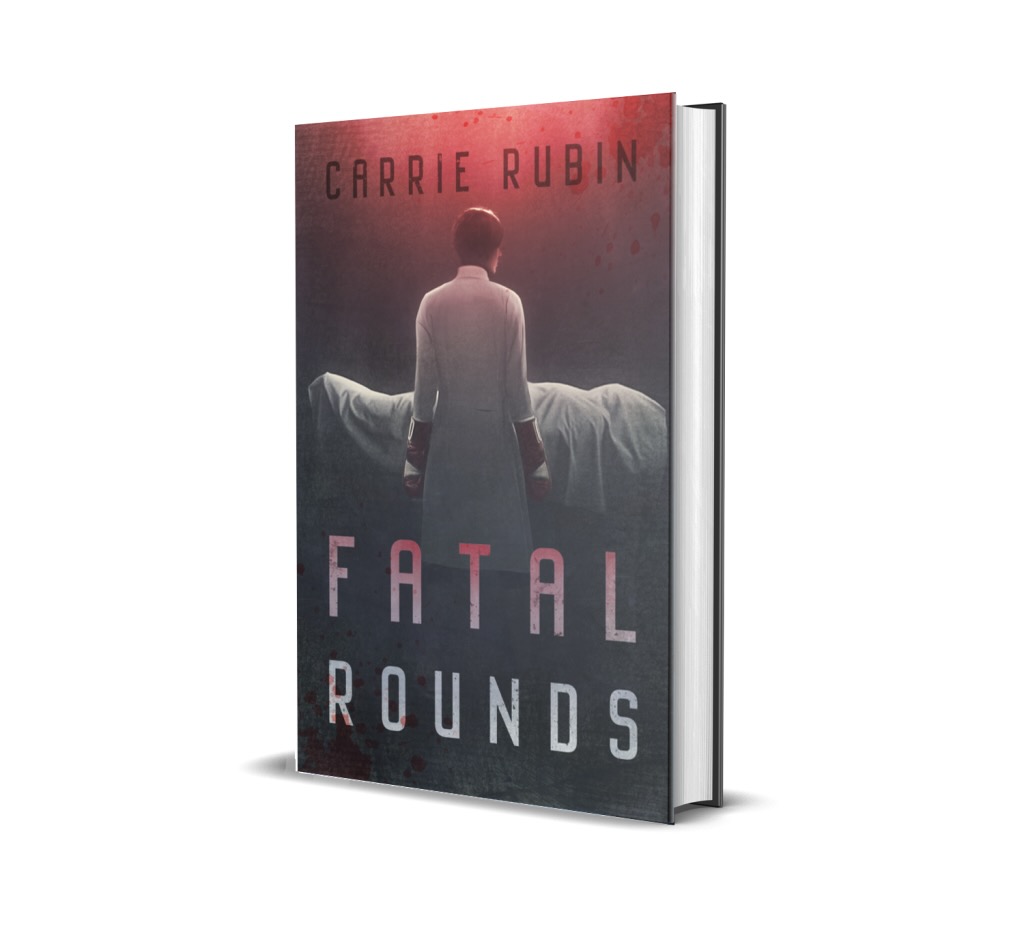 Fatal Rounds is the first in what appears to be a series (well, part of the title is Liza Larkin Book 1 … heh heh). Larkin is an odd character, although you don’t know that right away. She’s a new pathology resident at her second-choice hospital, second-choice not because her first choice turned her down, but because the second choice is where her stalker works. Yes, Larkin has a stalker and she’s decided to stalk him in order to find out why he is stalking her. This is all in chapter one. Talk about hitting the ground running.

The decision to stalk her stalker is the reader’s first clue that Larkin is not your average pathology resident. She’s different, and Rubin carefully and with great sensitivity teases out Larkin’s issues. First, her mother has schizophrenia, exacerbated by the untimely death of her husband. Second, Larkin herself has schizoid personality disorder. Her diagnosis is not interchangeable with her mom’s, and it’s a complicated diagnosis. Some labels fit her, and some don’t. What keeps her together is recalling her father’s words: “You are not a list of symptoms, Lisa. You are not a diagnosis. You are you, you are special, and you are wicked smart. Most importantly, you have a good heart.”

That Rubin includes all this info in the first couple of chapters is so important. Larkin and her mother are not stereotypes lifted out of the Diagnostic and Statistical Manual of Mental Disorders. That is made clear right away, as is the fact that people, even those who are well-meaning, will revert to labeling when they feel afraid, threatened, or just confused. That’s why I consider this novel a kind of short course on psychopathology. Not only does Larkin struggle with her own anti-social tendencies and anger management issues, but she also has to help manage the ebb and flow of her mother’s psychosis. The reader learns a lot about the fine lines some people like Larkin have to walk.

Off the bat, the reader is sympathetic to Larkin. She’s honest about her issues and protective of her mother. You don’t blame her for wanting to figure out why the stalker–Dr. Sam Donovan, trauma surgeon extraordinaire–seems to have an interest in her. But, also because of her issues, as she takes risks to follow Donovan, snoop on him, and build a case against him, you start to wonder whether she is imagining things. At least I did.

I started doubting Larkin’s mental stability, but, as if Rubin knew that would happen, Donovan started showing his ugly side, the cracks in his otherwise perfectly polished armor. Rubin’s timing in this novel is perfect, and the boxing metaphors that Larkin uses to describe her challenges with Donovan are well done.

Larkin goes so far as to risk her residency, ultimately her career, when Donovan wins a few rounds. Before Larkin realizes it, a lot more than her residency is at stake. Donovan knows that losing her residency won’t stop her from trying to prove he’s guilty of murdering former patients. So he goes after those closest to her, the few people in her corner.

The story didn’t end when I thought it would end, and at first, I wondered, what more needed to be said? As it turns out, plenty needed to be said. There were the usual loose ends that needed to be tied up, but I really appreciated the final chapter. The reader, at least this reader, needed to sit with Larkin in her psychiatrist’s office and consider the questions he poses to her. Were there alternatives to the choices Larkin made in her pursuit of Donovan? Did she have to take the risks she took? You tell me after you’ve read Fatal Rounds.

You can get Fatal Rounds in the usual places:

Published by Marie A Bailey

I am a writer, knitter, cat mama, introvert, bleeding heart liberal, & Floridian via upstate NY and SF Bay Area. My church is in Nature, not religion. I dabble in iPhone photography, leaning toward "two-fers" such as insects on flowers. View all posts by Marie A Bailey